Hypothyroidism after radiotherapy for nasopharyngeal carcinoma

Radiation-induced hypothyroidism (RIHT) is the most common late effect of thyroid gland after RT to the neck. Incidence of RIHT ranged from 23–53% in HNC (1-4), and 14–54% in NPC (5-15). RIHT is observed as a late adverse event and usually occurs within 2 years after treatment. Without comprehensive follow-up, delayed diagnosis of RIHT results in diminished QoL and increases risk of life-threatening conditions like ischemic heart disease, myxedema, and birth defect (16-18).

Although evidences suggested a dose-response relationship between thyroid dosimetry and risk of RIHT (6,8,12,13), currently, there has been no consensus for dose constraint of thyroid gland, even in the latest Quantitative Analysis of Normal Tissue Effects in the Clinic (QUANTEC) guideline (19). This review summarizes the pathophysiologic changes of thyroid gland after radiation and recommendations of thyroid constraint from literatures as well as predictive tools for predicting RIHT in NPC. 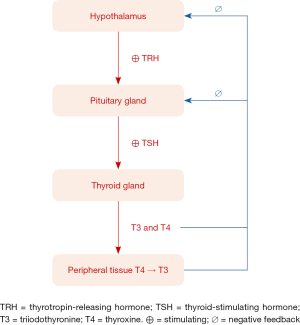 Thyroid gland is sensitive to RT. Many radiation-induced thyroid disorders have been reported including hypothyroidisms and hyperthyroidisms, Hashimoto thyroiditis, Graves’ disease, and thyroid tumors (2,20). Primary hypothyroidism is the most common thyroid disorder after head-and-neck RT, but actual mechanism is still clearly unknown. Radiation causes damages to follicular epithelial cells, parenchymal cells and small blood vessels of thyroid gland, leading to reduction of thyroid mass (6,13). Other causations include capsular fibrosis and iodine insufficiency due to malnutrition. Also, it is speculated that immune-mediated reaction is one of the common processes (2,8). In NPC patients treated with RT, there was abnormal rise of thyroid antibodies, thyroperoxidase antibody (anti-TPO) and thyroglobulin antibody (anti-TG), which were indicators of thyroiditis from autoimmune response (8). Under normal circumstances, TPO and TG are enzyme and glycoprotein that involve in the synthesis of thyroid hormones (Figure S1).

Changes of thyroid glands after radiation

In NPC, cervical lymph nodes are usually involved, therefore, it is recommended to regularly include bilateral neck lymphatics in the clinical target volumes (22). As thyroid gland is a normal structure located in lower neck region, neck irradiation causes inevitable dose to the thyroid gland.

Several studies reported dose-response relationship between mean thyroid dose and glandular volume reduction (6,13) as well as hormonal changes (6,8,12,13). Longitudinal studies on the pattern of thyroid gland changes after RT in NPC patients found that most changes occurred in the first 2 years. With the mean pre-treatment thyroid volume of approximately 18 cm3 in Lin studies, there was thyroid volume loss about 20%, 30% and 40% at 6, 12 and 30 months, respectively (6,13). There was a decrease of free T4 level starting at 6 months after RT, obvious drop at 12-month interval, reaching 20% reduction at 30-month interval, and became steady after 36 months. Similarly, serum free T3 level showed slightly decreased at 6 months but relatively remained steady throughout the study period. In contrast, the TSH level showed a rising trend gradually after completion of RT and the greatest decrease at 6–12 months up to 24 months, followed by a decreasing trend (6,8,13). The possible explanation for the phenomenon was the shrinkage of thyroid gland, caused by radiation damage and autoimmune reaction, occurred in the first 6 months and led to reduced production of thyroid hormones. Based on feedback mechanism, the reduction of circulating free T4 triggered pituitary gland to secrete more TSH to stimulate thyroid gland to produce more thyroid hormones until reaching normal level in the blood circulation. Evidences also showed that the thyroid gland and function were partially recovered after 2–3 years but long follow-up study was still needed on complete recovery ability of thyroid gland (13).

Currently, IMRT, an inverse treatment planning algorithm that maximizes dose conformity to tumor while minimizing unnecessary dose to surrounding critical structures, is considered as a standard RT technique for NPC in view of both dosimetric and clinical benefit (24-27). However, the benefit of IMRT comes with a potential drawback. With no specific dose constraint during plan optimization, IMRT contributed to a higher dose and irradiated volume of thyroid gland which might result in higher incidence and shorter latency of RIHT, compared with three-dimensional conformal radiotherapy (3D-CRT) in which midline shield in the anterior lower neck field usually applied (3).

With attempts to define threshold dose to the thyroid gland, a systematic review of 5 dosimetric studies based on RIHT was performed. They analyzed the relationship between the occurrence of RIHT and thyroid gland volume absorbing 10–70 Gy (V10–V70), mean dose (Dmean), minimal dose (Dmin), maximum dose (Dmax) to the thyroid gland. However, the results failed to define a clear threshold dose and dose-volume effect between thyroid dose distribution and the incidence of RIHT due to heterogeneity among studies including study design and parameters (28).

However, it is worth noting that there was no NPC study in the first dosimetric systematic review and only 2 NPC studies included in the second systematic review. In this review, Table 1 summarized clinical and dosimetric predictors for RIHT in NPC and recommendations for dose constraint of thyroid gland from the reported literatures. And, other than using only one or two dosimetric constraints, multiple points of dose volume constraint should be concerned during the process of IMRT plan optimization. Figure 2 demonstrated the recommended cut points in treatment planning software. The biological optimization such as equivalent uniform dose (EUD) is beyond the scope of this review.

Clinical and dosimetric predictors for radiation-induced hypothyroidism in nasopharyngeal carcinoma 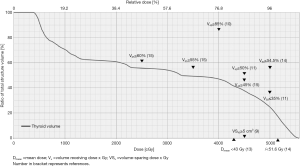 Considering there are many unmodifiable factors, e.g., gender, age, thyroid volume, and pretreatment TSH levels, minimizing unnecessary radiation dose to the thyroid gland is of paramount. This could be accomplished by many approaches, for example (I) matching the IMRT plan to a conventional anterior low-neck field with midline shield, so-called split-filed IMRT (36), (II) omitting treatment of lymph node level IV in T1 disease (37,38), and (III) diminishing overlapping between low-risk planning target volume (PTV-LR) and thyroid gland. Figure 3 demonstrates dose distribution and contour of thyroid gland and PTV-LR in stage T2N2M0 NPC patient. Of note, with minimal overlapping of thyroid and PTV-LR, 40 Gy of isodose line encompassed nearly half of thyroid gland. 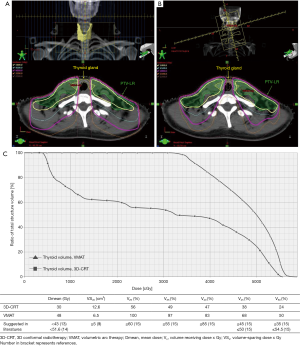 Although there is no QUANTEC report that covers RIHT, there has recently been proposing the use of normal tissue complication probability (NTCP) model to estimate risk of complication. Furthermore, it has been an increasing interest to evaluate and compare treatment modalities, such as x-ray vs. proton therapy, using NTCP model-based approach (39,40).

Purpose of NTCP model is translating dosimetric input into a clinically relevant outcome. In other words, “irradiated dose to organ” is depicted as “a probability or risk of developing toxicity of that organ”. Various mathematical models have been proposed to estimate the risk of complication as a function of assorted parameters of the treatment plan, tissue architecture and radiosensitivity (33). The most common types of NTCP models are Lyman model, logistic model, and logistic regression model.

Although there were many studies on dose-response model for predicting RIHT in HNC (19,29,32,34,35,41) but they excluded NPC patients or those whose pituitary gland dose >40 Gy due to possible damage to the HPT axis. To dates, there have been only two studies focusing on development of predictive tools for RIHT in NPC patients (30,31). Table 2 summarizes NTCP models for RIHT endpoint in overall HNC.

Most studies were retrospective and confounded with heterogeneity of disease and patient characteristics, variety of treatment techniques/regimens, and different follow-up protocol among studies. These limitations inevitably affected the predictive power of model (42). Therefore, prior to clinical application, it is necessary to perform external validation, especially in different clinical entity. More importantly, a well-designed prospective study with long-term follow-up period would accomplish precise and accurate information. Baseline thyroid function test is required to exclude preexisting thyroid dysfunction and not to overestimate the incidence of RIHT after radiation. Due to different fractionation regimen, DVH data of the thyroid gland should be converted to an equivalent dose in 2 Gy/fraction because different parts of the thyroid gland received heterogeneous fractionation dose. Besides, the novel predictive markers including circulating thyroid immune-mediated factors and radiogenomic data have potential to be integrated into the NTCP model for improving prediction ability and further implementing in treatment plan optimization. 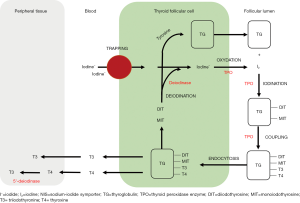 Conflicts of Interest: Both authors have completed the ICMJE uniform disclosure form (available at http://dx.doi.org/10.21037/anpc.2020.03.03). The authors have no conflicts of interest to declare.

Ethical Statement: The authors are accountable for all aspects of the work in ensuring that questions related to the accuracy or integrity of any part of the work are appropriately investigated and resolved.