The purpose of this case study is to illustrate a case of PH that is secondary to parathyroid tissue located in a rare anatomical region. Such a phenomenon can influence the choice of imaging modality to localise the pathology. Ectopic parathyroid adenoma in the pyriform sinus is extremely rare and a cause for failed parathyroid exploration (2). This case details the challenges clinicians face in locating adenomas in the pyriform sinus. We will discuss the embryological development of the parathyroid glands since this will facilitate understanding of potential ectopic locations and delve into the current literature.

We present the following case in accordance with the CARE reporting checklist (available at http://dx.doi.org/10.21037/anpc-20-22).

All procedures performed in studies involving human participants were in accordance with the ethical standards of the institutional and/or national research committee(s) and with the Helsinki Declaration (as revised in 2013). Written informed consent was obtained from the patient. A 59-year-old female of Caucasian ethnicity was initially referred by her general practitioner to an endocrine surgeon for a history of PH. She had a four-month history of fatigue, decreased short-term memory and concentration issues but no nephrolithiasis or gastrointestinal symptoms. Although there was no history of fractured bones, she was postmenopausal with osteopenia (T-score of −1.5 in the left femoral neck and total hip). Her serum calcium level was 2.61 mmol/L (2.10–2.60 mmol/L) and PTH level was 9.5 pmol/L (1.6–6.9 pmol). She had no other significant medical history, no previous surgical interventions, and no family history of thyroid or parathyroid pathologies.

On physical examination, patient was alert and orientated. Vital signs were stable by the bedside. There were no abnormalities found on cardiovascular, gastrointestinal, and neurological examinations of dual isotope parathyroid scan with single photon emission computed tomography (SPECT/CT) imaging failed to localise any sestamibi-avid parathyroid adenoma. A four-dimensional computed tomography (4DCT) was then utilised and this demonstrated an ectopic parathyroid adenoma measuring 5 mm × 5 mm × 9 mm in the submucosa of the right pyriform sinus apex (Figure 1A,B) with the epicentre 38 mm superior to the anteroinferior edge of the cricoid cartilage. There were plans of proceeding with an open parathyroidectomy under the endocrine surgeon since the initial thought was primary parathyroid adenoma. This was immediately abandoned given the new findings on 4DCT and the patient was eventually referred to an otolaryngology consultant within two weeks for consideration of microlaryngoscopy and an endoscopic approach to remove the lesion. 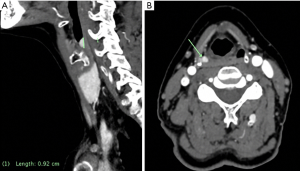 Endoscopic examination showed a prominent tan-coloured sub-mucosal mass measuring approximately 5 mm in the apex of the right pyriform fossa (Figure 2). After discussing these findings, the patient consented for microlaryngoscopy surgery scheduled (8 weeks after this consultation). Under general anaesthesia, she was intubated with a size 5.0 microlaryngoscopy endotracheal tube and microlaryngoscopy suspension was utilised to visualise the tumour. The submucosa of the pyriform fossa was infiltrated with 1% lignocaine and adrenaline before the lesion was removed using sharp dissection. This ensured the integrity of the adenoma capsule was maintained and limited tumour spillage or tumour remnant being left behind. 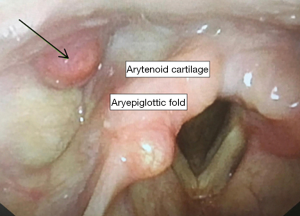 The specimen obtained was a tan coloured tissue measuring 16 mm × 10 mm × 4 mm. It contained a nodule (12 mm × 8 mm × 4 mm) weighing 0.21 g (Figure 3). Microscopic examination demonstrated a benign encapsulated tissue that was fat-depleted with chief cells and oxyphilic components, surrounded by squamous mucosa confirming to represent an ectopic parathyroid adenoma. The post-operative PTH and calcium levels normalised by day one (4.0 pmol/L and 2.39 mmol/L respectively) and upon review two weeks after her procedure, she had made good recovery with stable biochemical results and no adverse or unanticipated events. The patient was contacted by the otolaryngology team 12 months post-surgery for follow-up. She reported improvement with her fatigue, commenting that she was able attend to her activities of daily living such as shopping and cooking. Furthermore, her short-term memory and concentration had returned to pre-morbid. 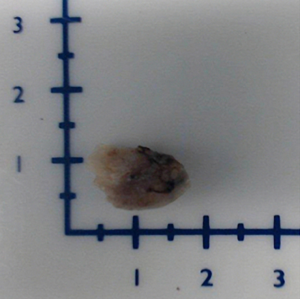 Ectopic parathyroid adenoma is a rare occurrence. In a study of 231 patients receiving surgery for PH, only 16% had ectopic lesions (2) and of these, none involved the pyriform sinus. Thus far, we know of only 13 cases that have been reported in the international literature. The rarity of this presentation poses challenges to investigation, diagnosis, and management. It is important that clinicians understand the anatomy and embryological development of the parathyroid gland in order to appreciate this ectopic adenoma.

In a case study of a 53-year-old female (4), the authors reported that their initial investigation with 99mTcSestamibi and SPECT/CT were initially deemed negative in demonstrating a parathyroid adenoma. A neck US showed a multinodular thyroid goitre but also did not visualise any parathyroid adenoma. US is cheap, non-invasive and highly sensitive, however, its accuracy of detecting ectopic parathyroid adenomas depends on technical skill, clinical interpretation, lesion size, and patient’s body mass index (5). In a meta-analysis, the pooled US sensitivity and positive predictive value for detecting parathyroid adenoma was 76.1% and 93.2% respectively (6). It was only until a contrast-enhanced CT scan was used that revealed a well-defined mass within the right pyriform. This was eventually confirmed with a flexible fibre optic nasopharyngoscopy. Upon re-inspection of the initial sestamibi and SPECT/CT scan, clinicians concluded that there was increased activity within the right pyriform sinus which was missed on initial examination. This highlights that despite most surgeons are more inclined to use 99mTcSectamibi and US as their first modalities, ectopic adenomas may be overlooked.

Another case series presented two individuals with parathyroid adenoma of the pyriform sinus (7). The first was a 66-year-old-male with a history of nephrolithiasis with elevated serum calcium levels and PTH. He initially had a resection of right inferior parathyroid adenoma which was preoperatively confirmed on SPECT/CT. The PTH levels however, failed to improve. Eventually, a sestamibi and 4DCT imaging localised a subcentre adenoma in the left pyriform sinus. In a recent survey practice patterns in the Asia-Pacific, only 3% of Australian and New Zealand surgeons use 4DCT as first-line investigation compared to 13% (P=0.038) with their Asian counterparts (8). The second patient discussed was a 68-year-old-female with severe osteopenia, multiple degenerative vertebral bodies, and osteoporosis of the left femoral neck and left forearm. 99mTcSestamibi, planar imaging and SPECT were used to identify a parathyroid adenoma in the right pyriform sinus (7). The authors recommended using multiple imaging investigations as pre-operative workup of patients with PH. However, they do acknowledge that pre-operative scanning may not localise an adenoma. As there are no established algorithm for scanning ectopic parathyroid adenomas, the authors suggested two pre-operative investigations to localise the lesion. These include 9mTcSestamibi scans, SPECT/CT and 4DCT which have high sensitivity and positive predictive values. If all these fails to identify the ectopic location, the authors advised using parathyroid venous sampling but acknowledged that this would be invasive.

SPECT/CT may visualise parathyroid adenomas from other anatomic landmarks and guide surgical treatment. A retrospective study of 1388 patients who underwent parathyroid exploration for PH, showed that SPECT-CT was more accurate for single gland disease (83% versus 77%) and multi-gland disease (36% versus 22%) than SPECT alone (9).

4DCT captures the unique characteristic of parathyroid adenoma where there is rapid contrast uptake and washout. This allows precise anatomic localisation, however the disadvantage being its very high radiation exposure. When compared to sestamibi, there is in excess 50-fold higher dose of radiation absorbed by the thyroid. For this reason, its use should be highly selective in the younger population (10). We believe 4DCT should be the last resort if the initial sestamibi is deemed negative. 4DCT had a sensitivity of 88% in a study of 45 patients who underwent neck exploration compared to 54% with SPECT/CT or neck US (11).

A recent survey of practice patterns in the Asia-Pacific showed that 75% of surgeons utilise both 99mTcSectamibi and US as primary modalities. The combination of either investigations improves sensitivity and specificity when compared to using just one modality alone (8).

In our case study, the patient was initially investigated with SPECT/CT. When this did not localise any sestamibi-avid adenoma, she then received a 4DCT scan which finally revealed an ectopic adenoma. This workup algorithm echoes many of the previous case reports published in the literature. Ultimately, undescended parathyroid adenomas are extremely rare with an incidence of less than 1%. Clinicians should note that 7% of persistent hyperparathyroidism after failed cervical exploration is secondary to ectopic parathyroid adenoma (12). This patient’s presentation is one that was initially puzzling for the clinicians involved. The first plan of management was originally to have an open parathyroidectomy despite the 4DCT result. However, this approach was correctly abandoned after much discussion and collaboration between an endocrine surgeon and an otolaryngologist. In conclusion, such a presentation is extremely rare but an understanding of the embryological development of the parathyroid, the use of appropriate imaging and embracing interdisciplinary approach should facilitate localising ectopic locations.

The authors would like to thank pathologist, Dr K. Francis from Western Diagnostic Pathology and radiologist, Dr Z. Khaleel from Perth Radiological Clinic.

Reporting Checklist: The authors have completed the CARE reporting checklist. Available at http://dx.doi.org/10.21037/anpc-20-22

Conflicts of Interest: All authors have completed the ICMJE uniform disclosure form (available at http://dx.doi.org/10.21037/anpc-20-22). The authors have no conflicts of interest to declare

Ethical Statement: The authors are accountable for all aspects of the work in ensuring that questions related to the accuracy or integrity of any part of the work are appropriately investigated and resolved. All procedures performed in studies involving human participants were in accordance with the ethical standards of the institutional and/or national research committee(s) and with the Helsinki Declaration (as revised in 2013). Written informed consent was obtained from the patient.